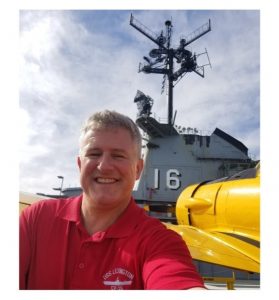 Steve Banta is a 1991 graduate of the U.S. Naval Academy with a bachelor’s degree in Engineering.  He completed primary naval aviation training with the VT-27 Boomers at NAS Corpus Christi, Texas, followed by advanced helicopter training at NAS Whiting Field, Florida, and was designated as a Naval Aviator on 18 March, 1994.

His Naval service includes operational deployments to the Mediterranean, Arabian Gulf, Caribbean, and Southeast Pacific theaters flying the SH-60B helicopter onboard various cruisers, destroyers, and frigates, as well as to the Arabian Sea onboard the aircraft carrier USS CARL VINSON during Operation Enduring Freedom in 2001.  While ashore he served as a flight instructor and also held various positions with the Navy and Secretary of Defense staffs.  He earned a Master’s Degree in National Security Strategy at the National War College in 2011.

His command tours include serving as Commanding Officer of the World Famous HSL-48 Vipers in Mayport, Florida, and as Commanding Officer of Naval Air Station Corpus Christi until July 2017.  He is authorized to wear the Legion of Merit, the Defense Meritorious Service Medal, the Meritorious Service Medal, the Navy/Marine Corps Commendation Medal, the Navy/Marine Corps Achievement Medal, and several unit awards.

Following his 26-year career in the U.S. Navy, in January 2018 he accepted the position of Executive Director of the USS LEXINGTON Museum in Corpus Christi, Texas.

His wife, Sarah, is from Corpus Christi, Texas, and serves as the Executive Director of USO South Texas.  They have one son, Nathan.